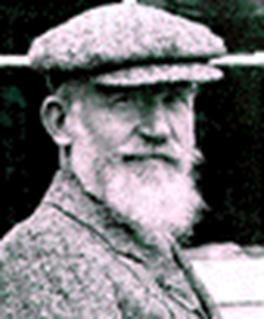 The UCD website on this conference is at bernardshawindublin.yolasite.com, where you need to go to register (when that becomes available) and to get complete details on everything, and the information below is meant to summarize, reinforce, and supplement that.   Some information is not yet available.

This conference is focused on Shaw’s return to Dublin, so to speak, to revisit his Irish identity, and papers discussing his Irish qualities, interrelationships with other Irish, and contributions to Ireland would be welcomed, along with testimony to his stature in and influence on world drama, and other topics as well.  If you choose to write on Irish themes, the following summary may be useful.

Dubliner Bernard Shaw was a personal friend of a long list of Irish writers, the most important of whom were Oscar Wilde, W.B. Yeats, Augusta Gregory, George Russell ("AE"), and Sean O'Casey. With his Irish wife, Charlotte Payne-Townshend, they sought to encourage younger Irish writers, particularly playwrights, including Norreys Connell ("Conal O'Riordan"), James Hannay ("George Birmingham"), Lennox Robinson, St. John Ervine, and Denis Johnston. Shaw was closely involved with the Abbey Theatre through Yeats and Gregory right from 1904 through the late 1920s; he was president of the Irish Academy of Letters during the 1930s. Through his friendship with Horace Plunkett, the founder of the Irish Co-Operative movement, Shaw worked hard behind the scenes during the 1917 Irish Convention to produce a constitutional basis for an independent Ireland. Also through Plunkett and A.E. he was a major supporter (both in terms of writing and finance) of the major cultural journal in the new Irish Free State during the 1920s, the Irish Statesman. He supported James Connolly and the Dublin workers during the 1913 Dublin Lock-Out; he worked for the defense of Roger Caement in 1916; he met Michael Collins; he corresponded with Eamon de Valera (about establishing an Irish film industry in the 1940s among other matters). And he left one third of his fortune to National Gallery of Ireland.

Papers (maximum of twenty minutes per talk) may be written from any critical perspective. Abstracts of approximately 300 words should be submitted to bernardshawindublin@gmail.com for consideration, along with a c.v and brief letter of introduction.

The conference will open with a reception on Tuesday night, May 29, 6:30 pm, at the National Gallery (bussing provided), with opening remarks by ISS President Leonard Conolly, followed by the Keynote Address on Wednesday morning on the campus of University College Dublin, with plenary addresses introducing each session thereafter.  Papers and panels will be presented there on Wednesday and Thursday, with conclusions on Friday.  A book celebration featuring books published on Shaw will take place on Wednesday, May 30, at Belfield House, at 5:30 pm.   There will be a production of a Shaw play some time during the conference.

The Keynote Speaker will be Nicholas Grene, speaking on “Dalkey’s Outlook: Shaw’s Scenic Sense.”   Plenary speakers will be Anthony Roche, speaking on “Shaw and Yeats: Theatre and Its Anti-Self,” Peter Gahan, speaking on "Bernard Shaw, Irish Nationalist," and Nelson O`Ceallaigh Ritschel, speaking on “Shaw, the Poor Law, and 1910 Dublin: The Rocky Road to Connolly."

The conference hotels are the Stillorgan Park Hotel (Single Occupancy €89.00 & Twin/Double Occupancy €99.00) and the Tara Towers Hotel (from €79 to €109), and campus accommodation at UCD is €59 a night for a single room including breakfast.   For many more details and how to make reservations, see http://bernardshawindublin.yolasite.com/local-accommodation.php

The International Shaw Society offers travel grants to emerging scholars who apply, normally for up to $500 of unreimbursed expenses.  For instructions and a form to send in, please go to www.shawsociety.org/ISS-Travel-Grants.htm.    DEADLINE IS FEBRUARY 24, 2012.

Questions about conference details should be addressed to bernardshawindublin@gmail.com, but questions may also be directed to R. F. Dietrich, ISS Treasurer & Webmaster, at dietrich@usf.edu or call (813) 503-0584.