The Shaw shelf, so to speak, will never surpass the Shakespeare shelf in terms of either sheer weight or number of volumes, but in the field of drama written in English it may have achieved a respectable second place, not bad considering what a relative latecomer Shaw is to that field.   If you will look through the next section of links on the ISS website where bibliographies are listed, under “Research Aids,” they will give you some sense of the vastness of the writing on Shaw, mostly critical/biographical/historical, some journalistic/epistolary, and some even fictional.   Below are some of the primary categories, generally considered, clicking on which will take you to places where you can purchase or in some cases view works online.   For specific suggestions for biographies and other kinds of books, go to www.shawsociety.org/research.htm.

There are new books on Shaw coming out all the time, paperback and hardbound, which ISS members often receive email notification of, and for that look in Books in Print, but of course the greatest amount of books are no longer in print and are to be found in the “used” (or should we say “previously owned”) category, and there you’ll have to fall back on your hunting and gathering instincts.  Look under “Bibliographies” in the “RESEARCH AIDS” section of the ISS homepage for suggestions.   If you have the name of an author or part of the title of a book, often an online search will bear fruit, with amazon.com being perhaps the first place to look.   Otherwise just do general searches for G. B. Shaw, George Bernard Shaw, G. Bernard Shaw, Bernard Shaw, and GBS, and you’ll find lots to choose from.   There used to be many wonderful book shops in the real world that kept large Shaw collections (I used to never miss Foyle’s when visiting London), but such are slowly disappearing, and anyway you’re just as likely to reach them online these days.   eBay is sometimes a good source for the rarer sort of books, if you like auctioning.    Of course almost all university libraries have large Shaw offerings, and some university and other public libraries even have special collections of Shaw material.   For a list of those collections, see SHAW 20 or click on the “Collections” link under “RESEARCH AIDS” on the ISS homepage.    It’s rare to find a whole book that can be read online, but there is one entitled British Drama: 1890 to 1950, A Critical History, which has much to say about Shaw and his period, and that can be reached at http://www.rfd2.net/britishdrama.htm.

The most likely place to find books recently printed is in any Shaw Series that comes along.   Mention was made in the “Works by Shaw” section on the ISS homepage of a Shaw correspondence series published by the U. of Toronto Press, but these books contain mostly work by Shaw; the only Shaw Series that publishes books on Shaw is the University Press of Florida Shaw Series, and ISS members who possess the code word (available on the members’ page) can get a 40% discount on purchases.   Click here to go to the series website.  An ISS membership application is available at www.shawsociety.org/2012-membership-form.htm .

Individual articles on Shaw have appeared n a variety of journals, magazines, newspapers, collections, etc., over the years and keep appearing, and you should consult the bibliographies mentioned in the “RESEARCH AIDS” section of links on the ISS homepage for a pretty thorough accounting of them.   Here we’ll just mention the articles in journals that are dedicated to Shaw.

Not long after the first Shaw Society was formed in 1941 in London, England, this group began publishing a thin paperback called The Shavian, which still continues and can be found in some libraries, although it’s hard to find a complete collection, and there are a few gaps.   When the Bernard Shaw Society was founded in New York later in the 1940s, this group produced another thin paperback called The Independent Shavian, which still continues and also may be found in some libraries.   Both of these journals, although full of fascinating commentary and history, are essentially house organs and the articles are not peer reviewed.   The only Shaw journal that is sufficiently peer-reviewed to acquire the academic respectability needed for listing in the MLA annual bibliography is a journal that was established independently of any society (although it is now offered at a discount by the International Shaw Society as a feature of membership) and was edited for many years by Stanley Weintraub (now edited by Michael Pharand).  It began as a paperback quarterly named The Shaw Review and has continued since 1980 as a very substantial hardbound called SHAW: The Annual of Bernard Shaw Studies (often abbreviated to just SHAW followed by the volume #, as in SHAW 32, due out in 2012).    To receive The Shavian or The Independent Shavian, you have to become members of The Shaw Society in the first case and of The Bernard Shaw Society in the second case.   SHAW, on the other hand, can be purchased directly from Penn State U. Press at the trade price (Click Here) or at a substantial discount through membership in the ISS (Click Here).

“Project Muse” is an online database of more than 200 journals from nonprofit publishers, to be found at http://muse.jhu.edu.  Many major libraries have access to it through subscriptions, and the ISS has access to it through a code that is given to members when they pay their dues.    The journal SHAW, for example, is available for reading online from the 2000 volume on.

An unusual way of commenting on an author is by including him as an actual or referred character in a fictional work such as a play, story, or poem.  To see the history of Shaw’s treatment as a fictionalized character and to read contemporary examples of this, please go to https://shawsociety.org/Fictional-Shaw.htm. 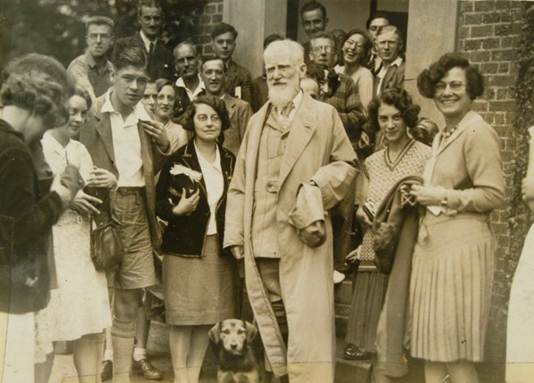